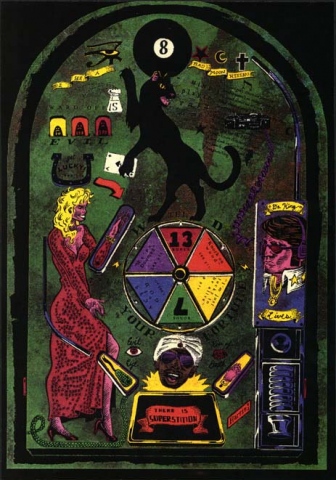 This piece is called Superstition, an obvious pun on the Stevie Wonder song. The piece was modeled after a pinball game, but the result resembles more of a tombstone. I did this at Pratt Institute in Brooklyn,NY, where I attended from 1991 to 1993, in the MFA Program for Communication Design. I recall, at the time, that I was taking a printmaking class for the first time, which somehow introduced color to my cartooning style , which had been almost exclusively black &white up to that point.

In this particular work, I explore the combination of the physical layering of color and comic-book illustration. Another pop-culture reference is the now-infamous rap song,"My Mind's Playing Tricks On Me", by The Geto Boys.